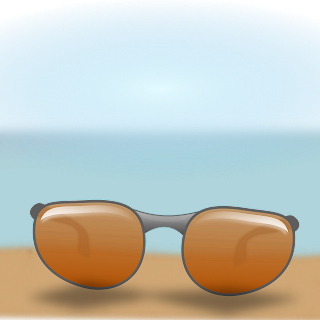 So, this is my first attempt at using the Inkscape vector graphics editor, following a free online tutorial found at envatotuts+, in Aaron Nieze's tutorial: Use Inkscape to Create a Pair of Sunglasses With Ease.
This was a great introduction to the Inkscape package for me, although I think the tutorial was for an earlier version of the program as I had to think laterally in parts. A good learning curve, with my learning as much from my mistakes as from the tutorial itself. The main problem I had was in getting to grips with the linear gradients as they were different to his examples. Still, I mostly got there in the end, with the slight mistake of putting the lenses on back to front. Hopefully will soon get to grips with the Inkscape.